Did they actually say that?

On occasion we should all read these quotes and realize that humor is rampant!

“Computers in the future may weigh no more than 1.5 tons.”
~Popular Mechanics, forecasting the relentless march of science, 1949

“I think there is a world market for maybe five computers.”
~Thomas Watson, chairman of IBM, 1943

“I have traveled the length and breadth of this country and talked with the best people, and I can assure you that data processing is a fad that won’t last out the year.”
~The editor in charge of business books for Prentice Hall, 1957

“But what … is it good for?”
~Engineer at the Advanced Computing Systems Division of IBM, 1968, commenting on the microchip.

“There is no reason anyone would want a computer in their home.”
~Ken Olson, president, chairman and founder of Digital Equipment Corp., 1977

“This ‘telephone’ has too many shortcomings to be seriously considered as a means of communication. The device is inherently of no value to us.”
~Western Union internal memo, 1876.

“The wireless music box has no imaginable commercial value. Who would pay for a message sent to nobody in particular?”
~David Sarnoff’s associates in response to his urgings for investment in the radio in the 1920s.

“The concept is interesting and well-formed, but in order to earn better than a ‘C,’ the idea must be feasible.”

“I’m just glad it’ll be Clark Gable who’s falling on his face and not Gary Cooper.”
~Gary Cooper on his decision not to take the leading role in “Gone With The Wind.”

“We don’t like their sound, and guitar music is on the way out.”
~Decca Recording Co. rejecting the Beatles, 1962.

“If I had thought about it, I wouldn’t have done the experiment. The literature was full of examples that said you can’t do this.”
~Spencer Silver, on the work that led to the unique adhesives for 3-M “Post-It” Notepads.

“So we went to Atari and said, ‘Hey, we’ve got this amazing thing, even built with some of your parts, and what do you think about funding us? Or we’ll give it to you. We just want to do it. Pay our salary, we’ll come work for you.’ And they said, ‘No.’ So then we went to Hewlett-Packard, and they said, ‘Hey, we don’t need you. You haven’t got through college yet.'”
~Apple Computer Inc. founder Steve Jobs on attempts to get Atari and H-P interested in his and Steve Wozniak’s personal computer.

“Professor Goddard does not know the relation between action and reaction and the need to have something better than a vacuum against which to react. He seems to lack the basic knowledge ladled out daily in high schools.”
~1921 New York Times editorial about Robert Goddard’s revolutionary rocket work.

“Drill for oil? You mean drill into the ground to try and find oil? You’re crazy.”
~Drillers who Edwin L. Drake tried to enlist to his project to drill for oil in 1859.

“Everything that can be invented has been invented.”
~Charles H. Duell, Commissioner, U.S. Office of Patents, 1899.
[Possibly my favorite – Prof Reynolds]

“The abdomen, the chest, and the brain will forever be shut from the intrusion of the wise and humane surgeon”.
~Sir John Eric Ericksen, British surgeon, appointed Surgeon-Extraordinary to Queen Victoria 1873. 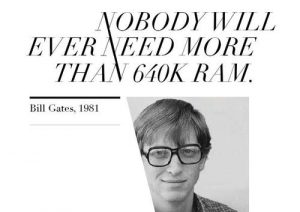